Being commissioned to design the hull of the Norwegian Cruise Line ship, the Getaway, was a really amazing experience. Only two other artists in history have been commissioned to showcase their work on NCL ships, so being one of the lucky few was totally insane to me. Besides that, it’s literally a billion dollar blank canvas that has become part of Miami’s landscape, which is the city I grew up in. So naturally, I couldn’t have been more honored or grateful for the opportunity. 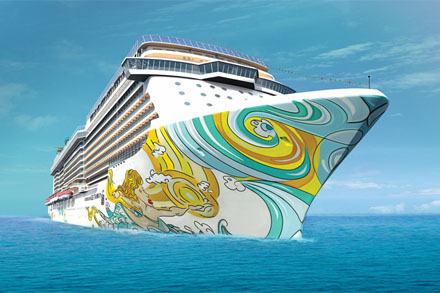 The way this partnership came about was also really amazing. Kevin Sheehan, who was the CEO at NCL at the time, invited me to dinner and told me they sent a company wide email to employees looking for suggestions for artists who they felt represented Miami. A new ship was being launched and they wanted to adorn the hull of the ship with art from a local artist where the ship was based. Peter Max was an obvious choice for New York but they really didn’t know of any artist that truly represented the city of Miami, so they asked their 2000 employees who were based there. Kevin told me that my name came up so much in the employee responses that they didn’t even need to consider anyone else. Here I am with no marketing, no manager or gallery pushing my work and yet the people of Miami know my art well enough to say I represent the city. I always felt that the quality of my work and the way I interact with people should be enough to push things along and boy, does it seem that’s been true.

Kevin also introduced me to Albert Scaglione, the owner of Park West Gallery during this time. The meeting was great and before long Park West became my first art dealer and has become an amazing partner as well. I can honestly say Albert and the whole Park West family have made me feel at home since we started our relationship. It’s because of them I get to travel the world meeting and presenting new work to collectors. It’s been the opportunity of a lifetime and allowed me to really grow as an artist. Truly a blessing. 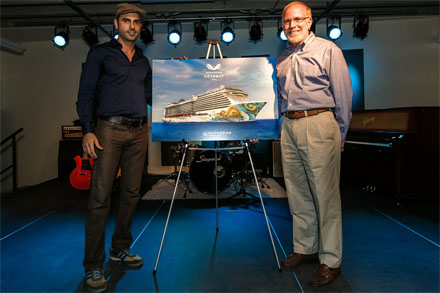 One of the questions I get asked the most is how long it took to paint the Getaway. I actually didn’t paint it. It’s basically one the world’s biggest paint by numbers. One of my main concerns was how the curves of the ship’s hull would affect the artwork, so I worked extensively with the architects that were working on the ships to understand the shape of the Getaway. That process alone was quite a learning experience and part of what I love about collaborations. Being able to learn from others that are proficient at what they do through the pursuit of bettering my understanding of my craft and in turn becoming a more well rounded artist.

For the design I wanted to create an iconic image that would have a larger than life appearance. Something that would look really impressive coming in and out of ports since that is when most people see the outside of a ship. The idea of a mermaid seemed most fitting because they have an ancient connection to the sea and represent the symbiosis of women and the sea. On the back of the ship are pelicans and a lighthouse which are a visual intimation that the Getaway always gets to port safely.

The architects sent me the ships renderings digitally and I did the art to scale in Illustrator using 15 Pantone colors, an international color matching system. From there the image was projected on the Getaway while she was in dry dock being built. I believe it took a crew of 12 people about 3 months to complete both sides while I was in the studio working on new paintings. Crazy.

this email address has already subscribed.